Let’s not forget that today is a solemn holiday here in the U.S.  I never want to disparage that because I really respect those who volunteered for their country and made the ultimate sacrifice.

That being said, I feel like I can simultaneously acknowledge the holiday and share this Monday funny.

About a month ago, my mother-in-law sent an email asking for my kids’ measurements — she had some leftover grey tencel fabric and wanted to make K-Man and Ell-Bell matching outfits with Paw Patrol patches on them.  Lord help me.  Like a good daughter-in-law, I ignored the email.  So she sent it again a few days later.  I ignored some more, and then I delayed, and then I went out of town, but she persisted, and eventually I sent her some measurements.

On Friday, these puppies arrived in the mail.

The mother-in-law never disappoints.  I just want to know why she hassled me so hard for measurements and then ultimately made my son’s and daughter’s shirts the exact same length.  K-Man had to wear a t-shirt under his outfit so as not to expose his belly button.

I guess I’ll just add these to the pile of clothing that my kids will never wear but I still have to keep for the rest of time.

Today is NaBloPoMo Day 7, and my theme of choice is In-Laws.  You know, because my blood pressure didn’t take enough of a beating from yesterday’s birthday-inspired pizza extravaganza.

Like many of us, I struggle with my mother-in-law.  She is an absolutely ridiculous woman, and I’m sure this won’t be the last time she’s featured in this space.  At the risk of sounding incredibly petty and ungrateful, today I’d like to roast her for being 100% awful at gift-giving.

Now I want to be very clear up front that my beef isn’t with how much money she spends on the gifts she gives.  I can appreciate an inexpensive gift.  The problem is that her gifts are sometimes impersonal, sometimes categorically hideous, and almost always unbelievably inconvenient (in that we have to find a way to dispose of them).  It’s gotten to the point where I will go to great lengths to avoid spending Christmas with this woman, because her gifts just make me so disappointed and worked up.

Shall we go back to the beginning?  I started to suspect that MIL lacked the gift of giving when she shipped me something right after Hubby and  I started dating.  It was a pair of pillows. Fleece and pea green, with fringes just kind of cut right in to some extra fabric on the sides.  Not the most offensive thing ever, but so unbelievably ugly.  I found out later she saw the pillows at a church sale and “thought of me.” Wow, ok.  I didn’t know I was giving off a pea green fleece vibe, but whatever.

Things went downhill from there.  For example, Christmas 2013.  Hubby and I got really into it, like we usually do, and went overboard with gifts, like we usually do.  And I’m not asking for full-scale reciprocation or anything, but something more than one gift for the two of us to share would have been nice.  Especially when that one gift was a bottle of wine stationed inside a tacky AF Santa Claus wine bag.  Now maybe you’re thinking, a bottle of wine is a perfectly acceptable gift, and I don’t disagree! The problem is, we were asked to surrender that bottle of wine at dinner, as it was in fact intended to accompany the meal.  Turns out our gift was actually the Santa Claus wine bag, not the wine inside.  And you better believe I left that wine bag on the dresser in the guest room when we skipped town.  I can be a little passive aggressive I guess.

And then there was the time she made K-Man and his cousin matching outfits.  Beautiful, adorable idea.  Completely garbage execution.   You see, she was dead set on using some extra fabric that she happened to have in excess, rather than buying something (literally anything) more appropriate.  So my poor son had to spend his first Thanksgiving in a three-sizes-too-big romper, with thin black-and-white checkered linen for the body, and purple velvet for the sleeves. 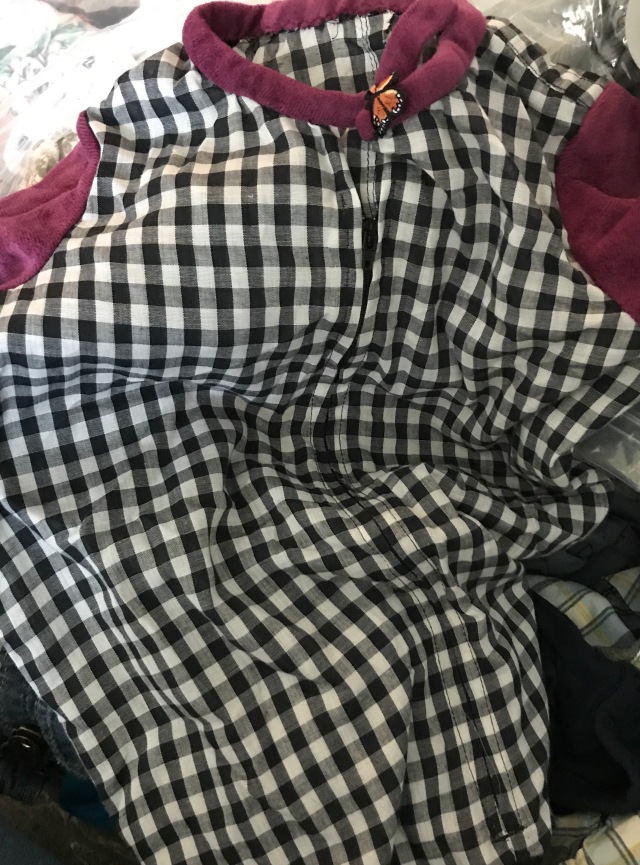 Yes, that is a butterfly clasp.  But why tho?

Last Christmas, she trolled me good.  I opened a box from her and pulled out what looked to be a family set of matching Christmas pajamas.  I die for matching Christmas jammies, and I was stoked!  But upon closer inspection, there were only two pairs of pajamas in there.  One pair in K-Man’s size, and then another pair that was a women’s Medium.  Nothing for Ell-Bell, and seemingly nothing for Hubby.  She later explained that the women’s Medium was actually for Hubby and I to share, because she thought that he could wear the bottoms, and I could wear the top.  I think I’ve said enough about that.

She’s always sending us random boxes full of junk (aka “presents”) that she doesn’t want in her house anymore.  News flash, we don’t need the literal garbage you found while cleaning out your attic.  A box of broken white chalk?  A deck of 51 playing cards?  A fucking pine cone?  Please god, please stop sending it to us.

And she’s always trying to give me her old clothes. Hard pass.

Honestly, when it comes to gift exchanges with my MIL, I’d really rather get nothing at all.  Maybe she could save up the small fortune she spends shipping us those damned  boxes, and donate it to a good cause.  Ugh.