Let’s not forget that today is a solemn holiday here in the U.S.  I never want to disparage that because I really respect those who volunteered for their country and made the ultimate sacrifice.

That being said, I feel like I can simultaneously acknowledge the holiday and share this Monday funny.

About a month ago, my mother-in-law sent an email asking for my kids’ measurements — she had some leftover grey tencel fabric and wanted to make K-Man and Ell-Bell matching outfits with Paw Patrol patches on them.  Lord help me.  Like a good daughter-in-law, I ignored the email.  So she sent it again a few days later.  I ignored some more, and then I delayed, and then I went out of town, but she persisted, and eventually I sent her some measurements.

On Friday, these puppies arrived in the mail. 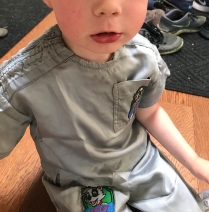 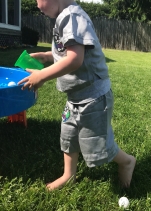 The mother-in-law never disappoints.  I just want to know why she hassled me so hard for measurements and then ultimately made my son’s and daughter’s shirts the exact same length.  K-Man had to wear a t-shirt under his outfit so as not to expose his belly button.

I guess I’ll just add these to the pile of clothing that my kids will never wear but I still have to keep for the rest of time.